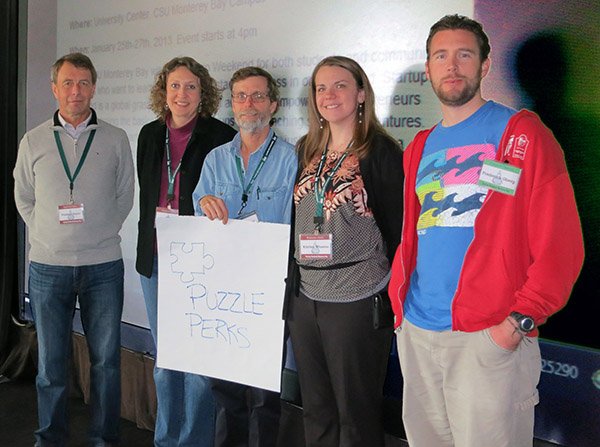 It started with an idea.

I was on an airplane, flying from nowhere to somewhere, filling out a Sudoku grid in the back of the airline magazine.  As I filled in each cell of numbers “1” through “9,” I wondered, “Would this work with letters and could I spell out words or phrases?”

So I gave it a go, reverse engineering the Sudoku puzzle with the letters “B-E-I-K-N-O-R-U-W.”

When the puzzle was solved correctly, it spelled out “NUKIE BROWN’” a term of endearment for a fine tasting brew called Newcastle, which was my boyfriend’s favorite beer.  I sent him the puzzle to see what he thought. A couple of months later we broke up… I like to think it was because he didn’t do my puzzle. That was 2008.

Fast forward to 2011, driving, my thoughts drifted to business ideas as they often do.  Randomly, the Sudoku puzzle idea from 2008 popped into my head. I wondered if instead of creating personalized messages in the puzzles, could these puzzles be used as a delivery method for business marketing.  I tucked that idea away in my head.

Knowing nothing about creating a business, I dabbled in Google searches, but had zero courage to actually make a go… until January 2013 when I signed up for Startup Weekend™ at California State University Monterey Bay’s Institute for Innovation and Economic Development (CSUMB IIED).

I wish I could remember who told me about Startup Weekend™, because I really need to buy them dinner.  If you have a business idea and have no idea what to do next… commit to the 54 hours of a Startup Weekend™… and then buy me dinner if it pans out for you.

Startup Weekend’s model is efficient, expertly incorporates collaboration and dedication, and relies almost exclusively on experiential learning.  You have to roll up your sleeves. There are no wallflowers.

On Friday (Day 1), there is food and group games so the participants, mentors, and organizers can get to know each other.  Once everyone is sufficiently full and warming up to one another, the 60 second pitches begin.

Anyone who has an idea has exactly 60 seconds to explain it with the hopes of getting voted into the next round.  In the Startup Weekend I attended, 32 ideas were pitched, including my idea, which I dubbed “Puzzles with Benefits.”  Each idea presenter was given a piece of butcher board paper with their idea’s title and told to stick it on one of the surrounding walls.  After all the 32 pitches were complete, everyone was given 5 sticky notes which represented 5 votes. For the next 20 minutes, we watched nervously as our butcher board paper either collected sticky notes… or remained blank.

At the end of 20 minutes, my idea was one of the 10 semi-finalists.  Little did I know that those 20 minutes were just the beginning of many more nerve-wracking moments.

After the top 10 semi-finalists were chosen by crowd voting, we began team formation.  There were many participants who came without an idea, but rather a desire to assist. And there were a handful of people who left Startup Weekend because their idea was not chosen.

I was lucky to gain  4 brilliant team members who joined because they liked games, and I promised not to be an asshole.  I didn’t (and still don’t) know much… but I did/ do know that collaboration is absolutely essential.

These four people brought an immense amount of knowledge… web design, app development, market research, pitch compilation, and an understanding of lean startups.  By Sunday, when the 10 semi-finalists were put on stage in front of judges to pitch, the newly named Puzzle Perks came to the court ready to win.

We had completed both an online survey and in-person market research. We had a logo, a website, social media footprint, a pitch deck, and a working beta app… and we ended up winning “Best Idea for the Bay,” which was either 2nd place or 4th place… I’m not quite sure.

But what we did win was validation.

Puzzle Perks was real, and I had enough gumption to actually give it a go in the real world.  Hard to believe that here I am, 6 years later, banging my head against the wall. Granted, I was on active duty for 5 of those 6 years, and Puzzle Perks is still not profitable.

But in these 6 years I have learned a lot and passed many difficult milestones despite both my cofounder, Paul Jacobs (still on active duty), and me completing overseas tours.

I still believe Puzzle Perks offers a disruptive business model for the mobile game industry, and with the right teammates I know that we can scale it profitably, and eventually exit.

The crests and depressions of creating and sustaining a startup are absolutely real.  It takes massive amounts of grit and courage with a large helping of insanity, balanced with rational decision making to keep trudging forward.

I am reminded of the Tom Hanks quote in the movie Cast Away every time I want to quit.  “So now I know what I have to do. I have to keep breathing. And tomorrow the sun will rise, and who knows what the tide will bring in.”

Kristen Wheeler is a Navy veteran, the Co-Founder of Puzzle Perks in Norfolk, and a Member of the VeteranCrowd Network, VA. She can reached at kristen@puzzleperks.com.

3 thoughts on ““Tomorrow the sun will rise, and who knows what the tide will bring in.””