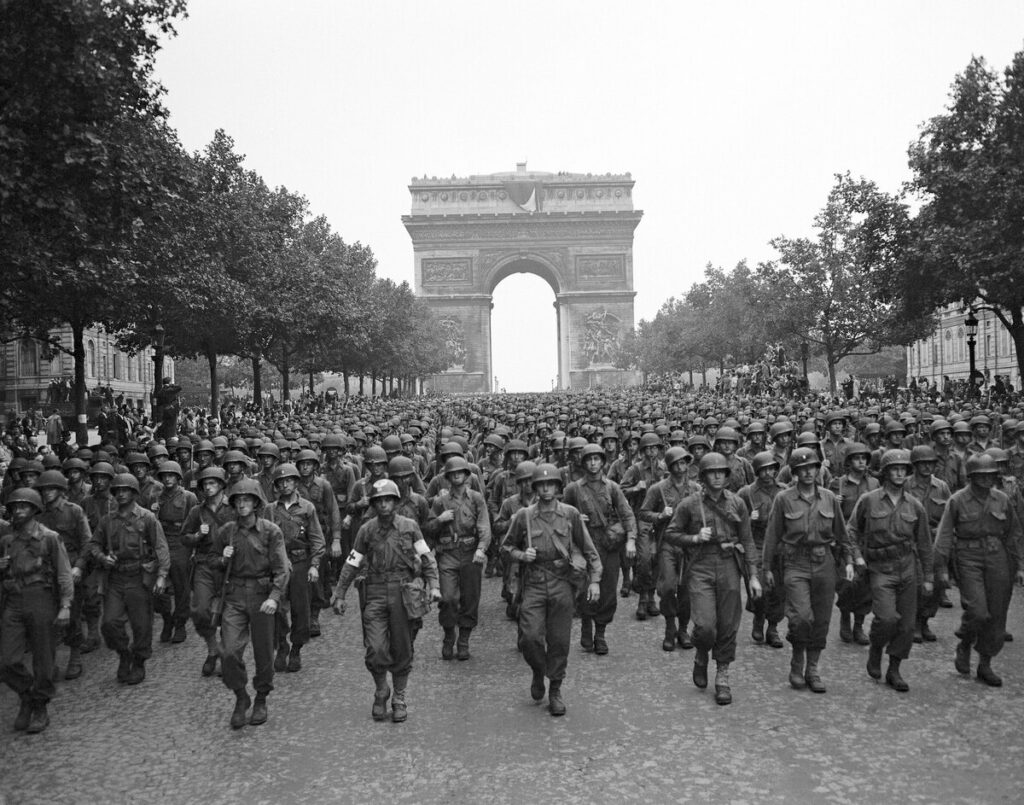 It is Veterans Day, and so I pose a question.

Have you ever stopped to wonder? It really is a miracle we are all here today.

"Dad," your grandfather, was commissioned a second lieutenant in the United States Army on August 19, 1941, the occasion of his 21st birthday. He headed off to artillery school and a World in turmoil. The British had been thrown into the sea at Dunkirk. The Germans and the Japanese were on the march, but our nation was not yet "at war."

Then Pearl Harbor changed everything.

On a September afternoon in 1942, Dad got a weekend pass from Fort Bragg, found a car and some gas ration tickets, and left Fayetteville to attend a North Carolina football game with some other soldiers. Wearing his pinks and greens, he stood out, and many fans struck up conversation.  So he followed the advice of a stranger seated next to him. "You should go over to the country club in Greensboro. I think they host a mixer on Saturday evenings."

It isn't a short drive from Chapel Hill to Greensboro. They arrived a little late that evening to a sparsely attended mixer...

"Mom," your grandmother, reluctantly acquiesced and headed to the Greensboro Country Club on that same September evening.  At the tender age of 20, she was already pinned by a fraternity boy destined for medical school - she went to keep her girlfriends company. I think they were walking out when four soldiers walked in.

The hostess convinced them all to stay. I like to think Dad had great timing - and there is something about making a grand entrance and a man in uniform.

If your grandfather could do one thing well, it was making decisions.

Dad told Mom - that night - that he loved her and he wanted to marry her. The man did not mess around, made the best use of his limited time, and was unflappable in stressful situations - that was certain. She even let him kiss her by the tennis courts!

Four dates and slightly more than four months later, they married on February 4, 1943 in the First Presbyterian Church of Greensboro.

Your Uncle was born in March of 1944 in Greensboro, NC. Dad was already in New York preparing to ship out to Europe. His battalion commander couldn't issue a weekend pass, but wouldn't look for Dad for 36 hours either. Dad ran to Penn Station.

A conductor found a berth for this soldier without a train ticket, and Dad was able to meet his nine day old son and spend eight hours with him - the last time they would be together until November of 1945.

Dad criss-crossed the Atlantic in a convoy. He witnessed V-1 Buzz Bombs over England. He entered France over Omaha Beach a few weeks after D-Day when the beachhead was only miles deep. He fought in Patton's Third Army, in Operation Cobra, the breakout from Normandy.

He endured the European winter, spent Christmas in a small French town in a house with no roof. Dad's letter to his infant son, my brother, written from a "Foxhole in France," was only to be delivered upon his death. A copy of this this letter is one of my most prized possessions. A 23 year-old fighting a war shares clarity about life and how to be a man.

He witnessed the horror of the concentration camps at Dachau.

Had the Japanese not surrendered, Dad was slated to ship to the Pacific to continue the war. He, for one, was glad about the atomic bomb. He never considered himself a hero, but knew he served in the company of heroes.

So it really is a miracle we are all here today.

On Veterans Day for years to come, I pray you will pause and remember your grandfather. He survived the War, came home and loved your grandmother for 73 years of marriage.

Share their story with your sons and daughters. It is, after all, a miracle.

Bob Louthan is the Founder of the VeteranCrowd Network.