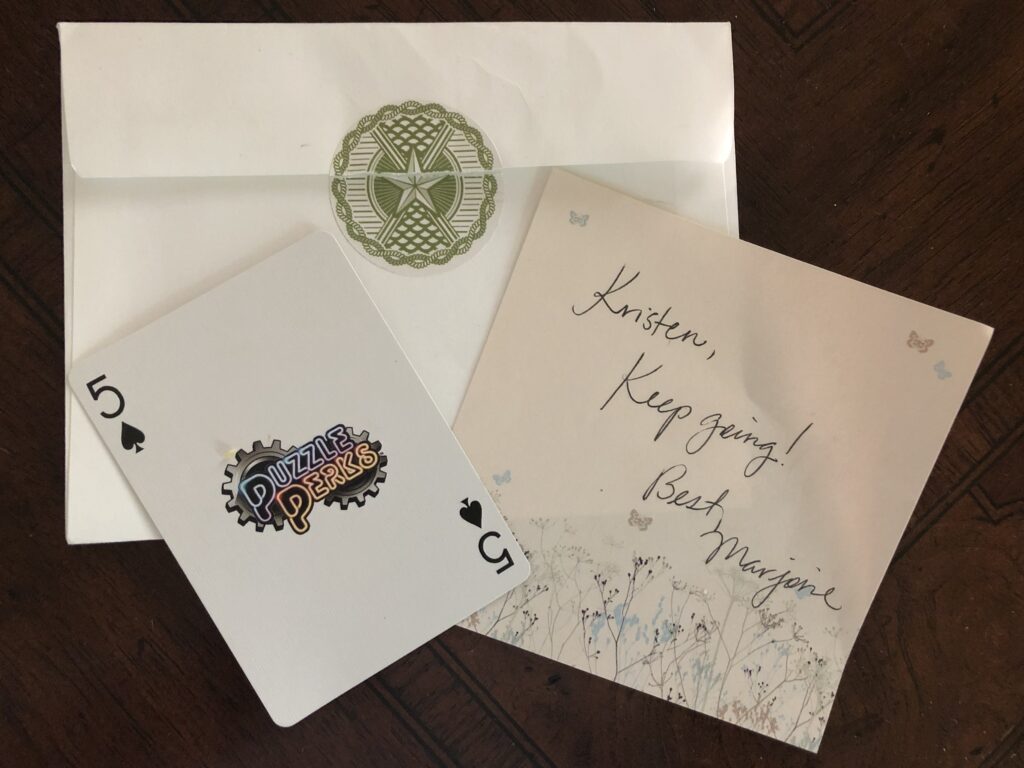 Bob invited me to create another blog post for submission to VeteranCrowd… so here’s the second blog post about Puzzle Perks.  The first blog post was much easier to write than the second but missing this opportunity to get some thoughts out into the wild via VeteranCrowd is not something I should pass up.  Thanks, Bob!

If you haven’t read the previous submission about Puzzle Perks, “It Started with an Idea,” it’s basically a quick summary of how Puzzle Perks came to be.  So much has happened since first pitching at Startup Weekend™ in Monterey, CA in January of 2013.  In fact, Puzzle Perks will technically turn seven years old on January 23rd.  That number makes me feel like such a failure.  There’s been an enormous amount of learning, but I’m still failing the test.  But, I’m still here and still working to test the model and find success.  Most days, finding success feels like a restless activity.  I’m currently in limbo.  We’ve dramatically leaned our expenses and currently go through the motions just to keep the accounts active, so when the time comes, the business administrative avenues don’t have to be repaved.  To say the least, this current period of time isn’t fun, but we are trying to count the wins, and learn from the losses.  I do my best to remember the truly amazing things that have happened along the way.

The Five of Spades

October 2017, I attended Bunker Labs’ “Muster Across America” event in San Francisco.  It was there that I first met Marjorie K. Eastman, former Army Intel Officer and author.  We linked in on LinkedIn.  In 2018, Marjorie started a weekly post on LinkedIn featuring veteran owned businesses and non-profits.  Each week, for 52 weeks, Marjorie would not only write a descriptive article about a business, but she would also assign it a card from the traditional deck of 52 cards.  (Clever, right?) I reached out to her and told her about my fledgling startup, Puzzle Perks.  It was in March 2018 that Marjorie awarded Puzzle Perks with the 5 of Spades and did a write up through OpsLens Media. Puzzle Perks was in the Apple Store and we were deep in the throes of testing our app…not yet realizing this was actually going to be our “minimal viable product” (the other kind of MVP) and needed a lot of work.  It was a hopeful time.

And then Marjorie surprised all 52 businesses she highlighted throughout 2018 with the announcement that Bicycle Cards was going to make her virtual deck into a real one, Frontline Leaders collector’s edition.  What in the world?!  So, majority of the honorees gathered in Nashville for the official release.  It was an all-day affair, culminating at the Grand Ole Opry where country musicians Big and Rich held up Marjorie’s deck in between songs.  The whole experience was surreal.  I felt like Puzzle Perks didn’t belong.  Like we were the frauds… haven’t made a penny, model is still unproven, and flat broke.  We were sitting among highly profitable businesses and extremely impactful non-profits.  As honored as I was, it just didn’t feel right.

The Bicycle Frontline Generation Deck was available online for an entire year.  My guess it that between 80,000-100,000 decks were produced.  I’m so proud of Marjorie.  She worked her tail off to turn her virtual deck into what it is today… a complete success.  As 2019 closed out, so did the availability of the deck.  So, I ordered as many as my budget would allow.  I look forward to giving them away in the future… while saving a couple for myself.  Its bittersweet.  The inclusion has been inspiring.  But I can’t help but feel stagnant at this moment.

When my box of cards arrived, I opened it with a heavy sigh and a furrowed eyebrow.  But it only took a few seconds for my eyes to well up with tears while the corners of my mouth curl upwards in a smile as I pulled the note Marjorie left out of its envelope.  “Kristen, Keep Going! Best, Marjorie.”  She knew my struggle without me having to explain all the churn.

And this is why the veteran entrepreneurship community is amazing.  We cheer each other on.  We open up to each other.  We offer advice.  We listen.  We want to see each other reach complete success.  We inspire each other.

This coming August 2020 I will start community college and learn how to develop games while learning about advertising and graphic design.  The dream is not dead, and quitting would feel like the ultimate Failure (with a capital F).   Thanks, Marjorie… and the rest of you who encourage me to stay the course.

Kristen Wheeler is a Navy veteran, the Co-Founder of Puzzle Perks in Norfolk, and a Member of the VeteranCrowd Network, VA. She can reached at kristen@puzzleperks.com.